The 5th FreeFrom Food Awards Ireland 2020 took place on Thursday 8th October, with the eagerly awaited announcements made virtually, following pandemic related delays. “We are delighted to get the news out to our winners, ahead of the Christmas shopping season,” says John Burke, founder of the FreeFrom Food Awards Ireland. “Finally those that have won awards can proudly display them, helping freefrom consumers to pick the best quality products available to them.”

Over 500 entries were judged both before and after lockdown, with fully socially distanced panel sessions completing the process in July. The Awards ceremony was due to take place live within the government guidelines until the recent changes resulted in the event taking place online. “We’re all missing the opportunity to meet up and see judges, entrants and friends,” says Burke. “But most importantly entrants have been waiting patiently to find out who has won what and to show their customers how well their products measure up in this growing market.”

The FreeFrom Food Awards assembles judging panels from various backgrounds, from dietitians, to parents, to coeliacs, to nutritionists, chefs, bakers and bloggers. “We are proud that in our fifth year, we have such loyal and well-seasoned judges who give great consideration to what should win each category. Debates are often passionate with different freefrom aspects taken into account,” Burke says. “Often the technical difficulty of creating a freefrom product wins the day and other times judges champion quality and innovation. All in all, their time and effort ensures that consumers can be guided as to what is the best on the shelf in the freefrom aisle.” 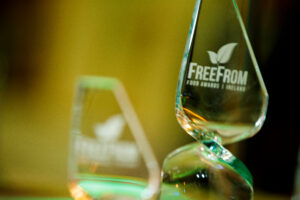 The freefrom industry goes from strength to strength, as winners of the only awards dedicated to freefrom products in Ireland were announced on Zoom, ahead of the Coeliac Society of Ireland’s Gluten Free Living Show, which takes place from Monday 12th to Friday 16th October. The Coeliac Society of Ireland’s Honorary President, Dr Nicholas Kennedy was winner of the Special Services to the Industry Award, sponsored by Juvela.

“We are thrilled to present this award to Dr Kennedy on behalf of the freefrom community, as he has consistently gone above and beyond to help those with dietary challenges and to improve the quality of life of coeliacs in this country,” says Burke.

With entries from the 32 counties the growth of the freefrom area continues in Ireland, as manufacturers respond to gluten free, dairy free and wheat free among the 14 allergens which limit consumer’s diets.

Product of the Year was awarded to Promise for their Gluten Free Soft White Loaf, a mark of how far the industry has come, when many remember gluten free bread that came in tins. 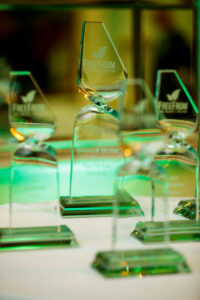 Product Range of the Year went to Tesco Ireland for their FreeFrom range, a prize they have taken for four years in a row, begging the question who can beat them with such a sizeable, easily available and competitive range.

For the first year ever, an award was given to Retailer of the Year, which went to Aldi for consistency throughout their stores and ranges catering for dietary issues.

Innovation awards went to Rosie & Jim’s for their excellent Gluten Free Chicken Range, Aldi Walls Honest Chips for bringing chippers chips to the plates of gluten intolerants once again, Promise Gluten Free Brioche for creating a brioche that is as good as its non GF counterpart and to Clinton’s Crisps Range, which are free of all fourteen allergens.

The Aldi Walls Honest Chips were also noted as Runner Up Product of the Year.

“Congratulations to all of our winners this year, the Awards continue to grow and develop and over the past five years we have seen many indicators of how the market is evolving and we are thrilled to encourage the development and growth of freefrom,” says Burke. “We get to give the consumer feedback to the entrants which can help them to tailor their products, from packaging to labelling, letting them know what works for those who have dietary needs. This can only impact positively on the sales of the products and that is what we love to see as coeliacs and as food lovers. We want to see inclusivity increase, especially when it comes to labelling and indicating how many freefrom diets one product can safely cater for.”