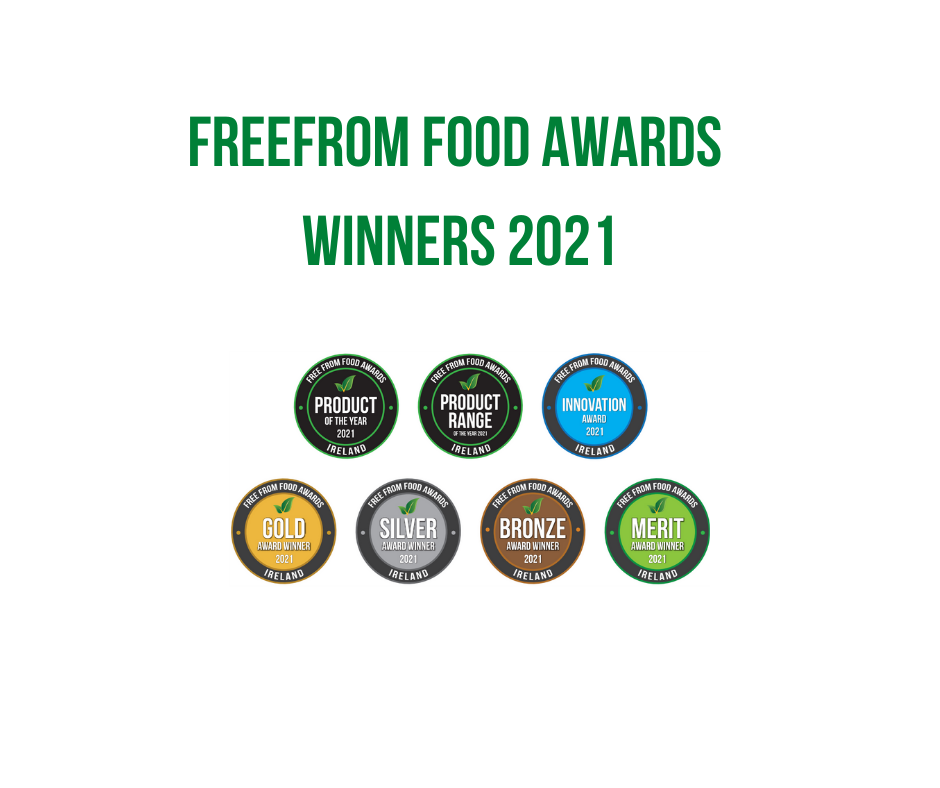 The FreeFrom Food Awards Ireland 2021 Presentations took place on Friday 3rd December, with over 40 categories announced online at a ceremony to mark the 6th year of the awards.

“We are thrilled to announce this year’s winners just in time for the Christmas shopping season, when food will be on everyone’s minds,” says John Burke, founder of the FreeFrom Food Awards Ireland (FFFAI).

“Our Winner’s List is a who’s who of the best of the freefrom industry, from small to large producers, helping freefrom consumers pick the best quality products available on the shelves.”

Over 500 entries were judged in August and September in socially distanced panel sessions at the FFFAI headquarters in Dublin. While an Awards Ceremony was due to take place in November, due to rising covid cases the event was switched to online. “The most important aspect of this process is being able to get the news out there,” says Burke. “Although our annual event is always a wonderful celebration for the freefrom community, safety is paramount. There’s a fantastic list of winning entries, which undergo great debate and consideration from our judges. We are excited to hear the reactions of our winners, who make such an effort to improve and innovate in freefrom.”

The FreeFrom Food Awards assembles judging panels from various backgrounds, from dietitians, to parents, to coeliacs, to nutritionists, chefs, bakers and bloggers. “Our judging panels were small this year, in line with social distancing, but we are very lucky to have judges coming back year after year. The interest in the industry is growing all the time. Debate is always passionate and there are many considerations before a product is awarded a gold, silver, bronze or merit,” Burke says. “Judges look at the technical aspect, the  ingredients, the freefrom-ness and sometimes it’s simply down to amazing taste.”

With entries from the 32 counties the growth of the freefrom area continues in Ireland, as manufacturers respond to gluten free, dairy free and wheat free among the 14 allergens which limit consumer’s diets.

Other awards given include the Special Services to the Industry Award, sponsored by Juvela, a stalwart freefrom supplier for many years.

“This is a bittersweet award, made posthumously to the late Lisa Acton, co-founder of the Awards in Ireland. Lisa was a champion for freefrom, running the kitchen, being involved in the background administration of the  awards and ensuring that the awards ran smoothly year after year,” says Anna Marsden, of Juvela. “It is in recognition of her dedication that we are delighted to give this Special Services to the Industry Award to Lisa’s family, knowing her contribution will never be forgotten.”

Product of the Year was awarded to Daiya Foods for their Thin Crust Meat Lovers Style Pizza – a product that was gluten free, meatfree and excellent. Product Range of the Year went to Mash Direct for their range of over 40 farm fresh products which are all gluten free and top quality. Retailer of the Year went to Aldi, once again for their continued consistency in store and throughout their various ranges catering for dietary issues, which continue to excite the freefrom consumer.

Innovation awards went to 9 White Deer for their Draught Stout disposable keg, catering for the at-home market; Trive for their supercharged barista Oat Drinks, Bute Island Foods for their range of vegan cheese, Dan & Monstro for their stir-in sauces catering for children, with hidden vegetables and Monaghan Foods for their fantastic meat free mince.

Kids’ Choice was dominated by Rosie & Jim’s with SuperValu and Aldi taking Silver and Bronze – our kids are discerning judges and voted for a diverse range of products, from chicken fillet chunks to a 5oz Rib Steak Burger. Parent’s Choice was also won by Rosie & Jim’s for their Quinoa & Herb Chicken Fillet and their Shredded Salt n Chilli Chicken, with silvers going to both Dunnes Stores and Aldi for their burgers. Aldi also featured with a bronze for their reduced fat meatballs, all popular with the parents of freefrom kids, looking for good quality convenience options available in retail.

Finally, the inaugural Lisa Acton Small Producer of the Year Memorial Award went to Rosaleen’s Kitchen. This was decided by Lisa, co-founder of the Awards before she passed away earlier this year. The steering committee were delighted to carry out her wishes and bestow this well-deserved award upon Rosaleen’s Kitchen, who have been consistently excellent through all their years of entering.

“Congratulations to all of our winners. This has been an extremely difficult year, losing Lisa Acton, my wife, without whom the awards would not exist. It has always been our remit to encourage the development and growth of freefrom for the sake of freefrom consumers and in Lisa’s memory we carry on,” says Burke. “The ability to enter and win awards for many producers impacts positively on sales and is
essential to us as coeliacs and as food lovers, ensuring we are safely catered for.”

The FreeFrom Food Awards took place in Ireland in  2016 for the first time and were hugely successful, with many brands benefiting from the opportunity to herald their products as award winning. Product of the Year winner 2016, Rule of Crumb were subsequently listed in over 450 Sainsbury’s stores with their Gluten Free Profiterole. Gold, Silver and Bronze awards are granted, along with a Merit badge for products still considered high quality by the judges.

Winners may display the relevant badge on their packaging, which helps consumers wading through freefrom sections to discern which products are best. Categories are diverse from pasta to ready meals, cakes to crisps and bread products to breakfast cereals.